This page will provide you with information about an endometrial ablation. For further details, you should speak to your consultant.

An endometrial ablation is a frequently undertaken gynaecological procedure, which removes the lining of your uterus (womb).

This operation is often used as a way to help relieve the symptoms of heavy periods (menorrhagia), in addition to reducing bleeding and menstrual pain.

As the lining of the womb is removed, this operation is not recommended for women who still want or plan to have children. However, even if your periods stop, this does not remove all possibility of becoming pregnant.

What are the benefits of the surgery?

Following a hysteroscopic endometrial ablation procedure, most women have a reduction in their periods. In the case of some women, periods stop completely.

What are the alternatives?

As an alternative to surgery, occasionally heavy menstrual bleeding can be alleviated a variety of oral medications or contraceptives.

In some cases an IUD (intra-uterine device, also known as a contraceptive coil) can offer some women significant improvements in their heavy bleeding.

What is involved in the procedure?

For the procedure, your gynaecologist will pass a special, tiny telescope (known as a hysteroscope) through your vagina, across your cervix into your womb.

Depending on the method used, they will then pass fluid through the telescope into your womb cavity (see figure 1), causing it to swell. This will allow the surgeons to a better view of your uterus via a camera attached to the hysteroscope. 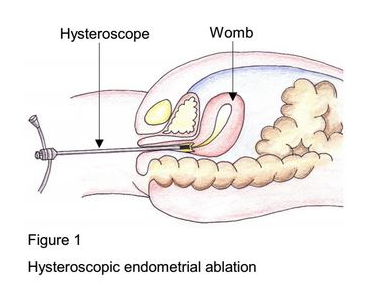 The gynaecologist will then use one of several different methods to remove the womb lining. This can include an electrically heated ball that can be rolled across the lining, a heated silicone balloon that is inflated to match the shape of your womb, laser energy or a probe heated with microwave energy.

This procedure will also remove any polyps or small fibroids they find, often a cause of heavy menstrual bleeding.

The operation is usually performed under a general anaesthetic and typically takes about 30 minutes to complete.

Are there likely to be any complications?

Unlike a hysterectomy (which used to be offered as a solution to resolve symptoms), an endometrial ablation has fewer complications and a quicker recovery time than a hysterectomy.

Even so, the procedure still carries some risks. General complications include pain, feeling or being sick, bleeding or discharge, infection or blood clots.

Specific complications include excessive bleeding, fluid overload, physical damage to your womb (which may necessitate an emergency hysterectomy), a failed procedure, haematometra (blood and clots accumulating inside the uterus), blood and fluid collecting in your fallopian tube, or continued bleeding or pain.

How long will it take for me to recover?

You are likely to experience some bleeding or discharge for up to four weeks.

Regular exercise should help you to return to normal activities as soon as possible. Ask the healthcare team or your GP for advice about what might be appropriate.

The information should not replace advice that your relevant health professional would give you.

Ask your GP for a referral to a Consultant Urologist.

Find out more
We use cookies to ensure that we give you the best experience on our website. If you continue to use this site we will assume that you are happy with it.OkPrivacy policy