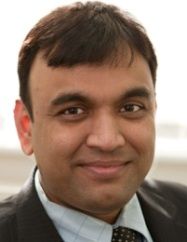 Mr Krishna Vemulapalli is an Orthopaedic Consultant at Barking Havering & Redbridge Hospitals NHS Trust. His NHS practice is at King George Hospital in Goodmayes and at Queens Hospital in Romford, Essex, where he specialises in foot and ankle surgery and Orthopaedic surgery for children. He is also Honorary Senior Lecturer at Queen Mary University, London.

His qualifications are MBBS, FRCS, FRCS (Tr & Orth). After graduation, Krishna Vemulapalli started basic surgical training in Newcastle-upon-Tyne and then completed his higher surgical training at The Royal London Hospital and the Percivall Pott Rotation.

He undertook further specialist training in foot and ankle surgery at Norfolk and Norwich University Hospital and in children’s Orthopaedic surgery at the Royal London Hospital. He was awarded the Ilizarov Travelling Fellowship by Smith and Nephew, which took him to Kurgan in Russia.

He is passionate about teaching and was instrumental in getting the Queens Hospital ‘Training Hospital of the Year 2014’ for Trauma and Orthopaedics in Royal London Rotation.

His teaching/ training & patient care was recognised and has won/nominated following awards.

Although Krishna Vemulapalli manages all general trauma and orthopaedic conditions, including hip and knee surgery, his specialist interests include simple and complex adult foot and ankle surgery, and paediatric (children’s) orthopaedics.

Clinic Times: By appointment only