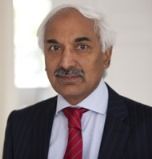 Mr Mannur is a Consultant Bariatric and Upper GI Surgeon at Homerton University Hospital and The Royal London Hospital. He commenced laparoscopic surgical work in 1990 and bariatric surgery in 1998. He has visited numerous obesity centres in France, Belgium, Holland and the US to refine his techniques. Most notably he has spent time working with pioneering surgeons Professor Michel Gagner in New York and Professor Kelvin Higa in California.

Mr Mannur is Director of Bariatric Surgery at the Homerton University Hospital. He not only established the bariatric surgical unit in 2003 but has also developed this into one of the leading reputed centres in bariatric surgery in the country. He has performed more than 3,500 weight loss surgeries including 2,000 gastric bypasses, 900 sleeve gastrectomies / gastric sleeves, 250 Duodenal switches/SADI-S, 100 band to bypasses, 50 band to gastric bypasses with very low morbidity and mortality and currently performs 10-15 obesity surgery operations a week.

He has been conducting training courses and symposiums in Baritatric Surgery both in UK and India since 2004. Mr Mannur has been presenting his work both in the national and international obesity surgery conferences and published in peer reviewed obesity surgery journals. He demonstrated many operations in the conferences both in UK and abroad. He has been elected to the British Obesity & Metabolic Surgery Society (BOMSS) Council to help BOMSS develop high standards in bariatric surgery in this country and has also been an advisor to NICE guidelines for the past 4 years.

Mr Mannur has performed laparoscopic gastrectomy and oesophagectomy for cancers and frequently helps Urologists and Gynaecologists to perform nephrectomy and hysterectomy respectively.