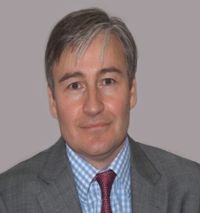 Since 1999 Mr Crinnion has been a Consultant Vascular & General Surgeon at Whipps Cross University Hospital. He has established an endovascular aneurysm repair (EVAR) service with the interventional radiologists, a one-stop venous clinic and a local anaesthetic endovenous laser clinic. He has developed a special interest in the management and prevention of the foot complications associated with diabetes in which he liaises closely with the Endocrinologists and Specialist Podiatrist.  Mr Crinnion has been trained in vascular ultrasound and now runs a Consultant led “one stop vascular clinic” which has significantly streamlined the service. Since 2011 Mr Crinnion is a member of the vascular surgical team at the Royal London Hospital treating patients with complex vascular conditions.

ENDOCRINE SURGERY
For the last 12 years Mr Crinnion has provided an endocrine surgical service performing between 50-70 thyroid/parathyroid procedures annually. He now performs almost all of the parathyroid procedures via a targeted approach using preoperative radionuclear and ultrasound imaging.

Member of the Vascular Surgical Society

Member of the British Association of Endocrine Surgeons