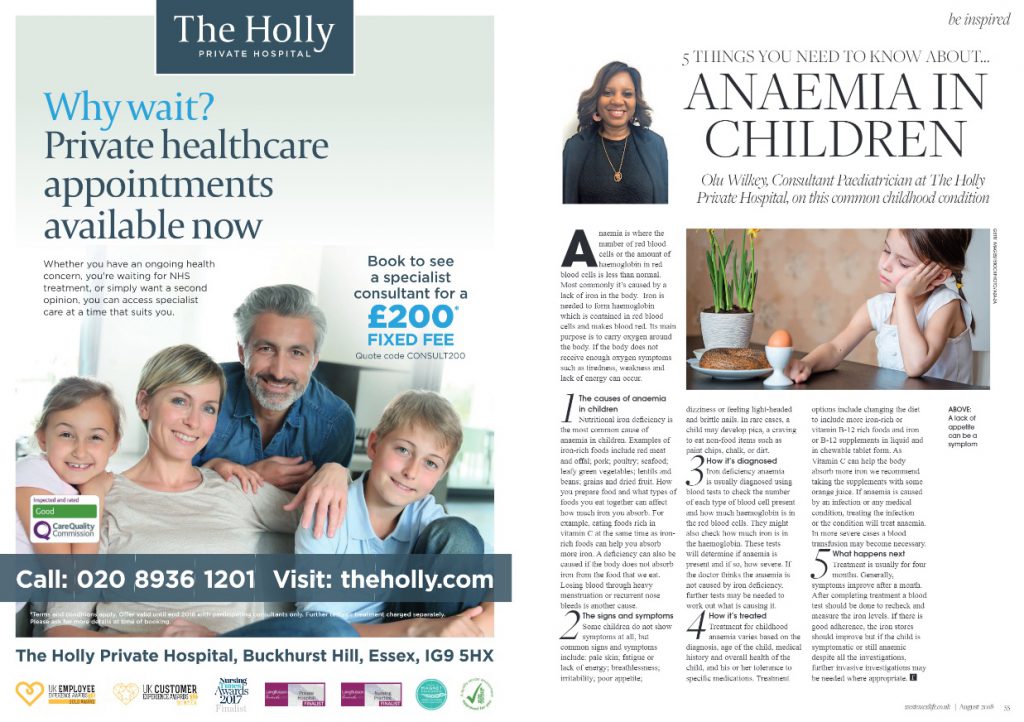 Red blood cells contain haemoglobin which is the substance that makes blood red. Its main purpose is to carry oxygen around the body. If the body does not receive enough oxygen symptoms such as tiredness, weakness, lack of energy can occur.

How is iron deficiency anaemia in children diagnosed?
Iron deficiency anaemia is usually diagnosed using blood tests. Your doctor will take a small sample of blood and ask the laboratory to carry out a full blood count (FBC) test. This will count the number of each type of blood cell present in a sample (full blood count) and check how much haemoglobin is in the red blood cells.

They might also check how much iron is in the haemoglobin. These tests will determine if anaemia is present and if so, how severe.

If the doctor thinks the anaemia is not caused by iron deficiency, further tests may be needed to work out what is causing it.

How is iron deficiency anaemia in children treated?
Treatment for childhood anaemia varies based on the diagnosis, age of the child, medical history and, overall health of the child, and his or her tolerance to specific medications.

What happens next?
Treatment is usually for 4 months. Generally, symptoms improve after a month of treatment. After completing treatment a blood test should be done to rechecked and measure the iron levels. If there is good adherence, the iron stores should improve but if symptomatic or still anaemic despite all the investigations the child may need further invasive investigations where appropriate.

Dr Wilkey as clinics at The Holly Private Hospital on Thursday afternoons.

Date: 05/12/2018
Quick Links
We use cookies to ensure that we give you the best experience on our website. If you continue to use this site we will assume that you are happy with it.OkPrivacy policy